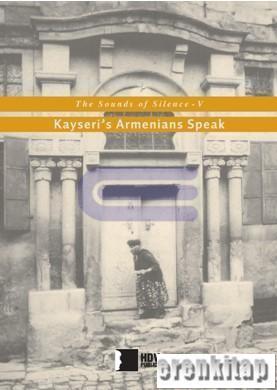 The book contains, in addition to the oral history interviews conducted, the introduction by the historian Dr. Mehmet Polatel and the afterword by the editor Dr. İclal Ayşe Küçükkırca, whom are members of the Hrant Dink Foundation's History Program.
Kayseri's Armenians Speak is taking us to a visit through the memoirs of the Armenian society. This book is giving clues about the "self" and "other" perception the Armenian society carries, by giving examples on the deportation and genocide memories transmitted through generations, as the other books of the series.

Kayseri was one of the rare cities in which Armenians continued to live during the Republican period, with 1,978 Armenians registered there according to the 1927 census. This total dropped to 1,600 in 1932, to 800 in 1960 and to zero today. After the migration of Armenians living in various areas of Anatolia to Istanbul, predominantly in the 1950s, a significant number of Armenians from Kayseri gathered in the Samatya district in particular.
Mehmet Polatel, Introduction

In the narratives of Kayseri's Armenians, Kayseri is a city which has an ancient history, which is self-sufficient and even has economic activity extending beyond its own area; a city which has 'happy' social ties based on mutual love and respect, as well as hierarchical and violent social conflicts. Perhaps this might be why it is a 'real' homeland in the memories, rather than being an 'ideal' and perfect space of nostalgia.
İclal Ayşe Küçükkırca, Afterword